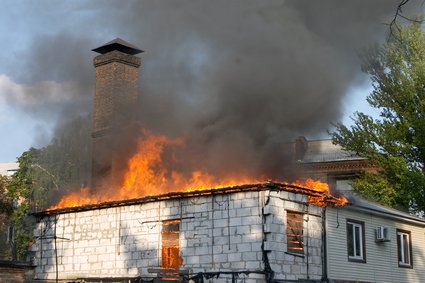 There were 1.24 million house fires in the U.S. in 2013 alone, according to FEMA. The good news is that is down more than 20 percent from a decade earlier, the bad news is that fires do still happen and are more common than most of us realize. Many house fires don’t burn down the entire structure, but even a small kitchen fire can cause extensive smoke, soot, and water damage to the entire home.

It is a little harder to prevent these than the other leading causes. However, try not to overload outlets with extension cords or appliances. Be sure to use surge protectors as much as possible. If your electrical system is out of date, it’s not a bad idea to have an electrician come out and do a quick check of the wires and system as a whole for any issues.

Wood burning stoves seem to be becoming more popular as an alternative, and often less expensive, heating source. And everyone loves to have their fireplace going on a cold winter day. However, both can be hazards if they are not used correctly. Always make sure your chimney is clear, and never throw away ashes that are not completely cooled down. Also, just as you wouldn’t leave a candle unattended, it is wise to keep an eye on your fireplace as well.

Lastly on the heating front, space heaters. Be sure you are using one that is safe and updated. Be sure it is not placed near anything flammable, and also be sure you turn it off when you leave the room or even when you go to sleep.

And now… the biggie…

According to the U.S. Fire Administration, 50 percent of house fires in 2014 were caused by cooking mishaps. With such crazy-busy lives, it is so easy to turn on the stove then walk away and forget all about it. The National Fire Prevention Association says 57 percent start on the range or cooktop, and just 16 percent inside the oven. Looking at all the injuries caused by house fires in 2014, 37 percent of them were also cooking related.

Please, when you are cooking, be alert and pay attention to what you are doing. If you have a grease fire, do not throw water on it. Instead, put a lid on top of it to smother the fire. Same goes for the oven – if something is on fire, turn the oven off and leave the door closed until the fire is out. Remember, oxygen feeds fire – so cutting off the oxygen source in a pan or the oven by closing it will help put the flames out faster

One key to preventing more fires from happening is to be aware of some of the most common ways they start. At Yellow Van Cleaning and Restoration, we have certainly seen it all – right down to the most innocent of accidents. We also have extensive knowledge on how to restore your Hastings home after the fire. And always be sure to contact a professional restoration team to get your home back to a safe environment after a fire.